Poachers have taken their tragic excesses even further this week as it was reported that a French zoo has had to install extra security for its animals. The Thoiry Zoo and wildlife park, which sits on the outskirts of Paris, has now put its rhinos under top security.

Zoo keepers there know how valuable white rhino horns can be on the black market. 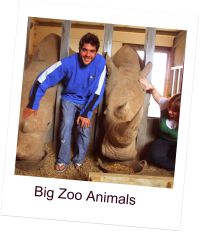 Although anyone with intelligence would know that a rhino horn has no medical properties to speak of, some people are convinced that they help cure cancer and impotence. Therefore Rhino horns can be sold on the black market for as much as 30,000 Euros. The horns also have value on the Asian market for the aesthetic appeal However the Thiory zoo owner said that this was absurd thinking: “Rhino horns are made of hair and therefore eating it is the same as eating your nails.” As Mr de la Panouse has had small monkeys stolen from his zoo before, he said it was necessary to step up security for the larger and more valuable white rhinos, even though they weigh more than two and a half tonnes and can be aggressive animals. The reason that the security measures were taken is because rhino horns that were on display (in a wildlife park nearby for educational purposes) have recently been stolen. In fact police believe that an Irish gang of organised criminals is behind the thefts. Although it is illegal to trade in rhino horns according to the international CITES agreement, poaching still remains the number one threat to animal extinction along with the destruction of their habitat. It was recently reported that the Javan rhino has now been driven to extinction in Vietnam.