The saying ‘birds of a feather flock together’ was disproved this week by an unusual friendship at Noah’s Ark Zoo Farm.

The farm zoo located in Wraxall, Bristol, is home to both exotic big zoo animals and the smaller UK animals that are common in petting zoos. That is why an unusual friendship has blossomed between a little yellow chick called Otis and a newly hatched African Ostrich called Oscar Jnr. 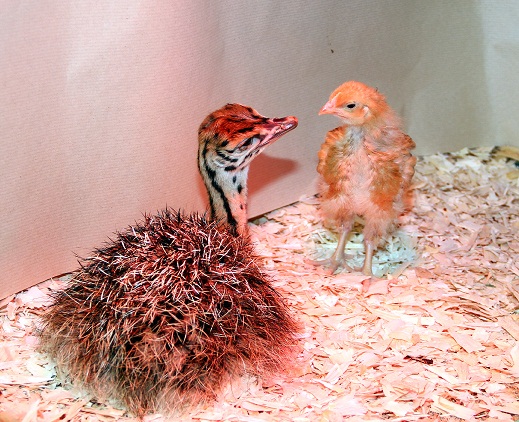 To the delight of zoo keepers, staff and visitors, the new arrival Oscar Jnr was happy to socialize lower down the pecking order, quickly making friends with an inquisitive, fluffy chicken.

Born out of season to his parents Oscar Snr and Olivia, Oscar Jnr wanted to find a snuggle mate to enjoy the warmth of his heated hatchery. Otis the chick has even been seen to perch on top of Oscar’s back, to get a higher view of their surroundings.

Bird Keeper Mandy Patch said: “We’re all thrilled to have another Ostrich hatch at Noah’s Ark, to proud parents Olivia and Oscar Snr, two longstanding residents of our African section. Little Oscar is doing very well, and he seems much taken with his new chick friend Otis – the two are inseparable."

Noah’s Ark Zoo Farm is only minutes from the M5 motorway on the outskirts of Bristol and is from open Monday – Saturday 10:30am – 5:00pm.