An American zoo has decided to throw a massive Halloween party so that children can enjoy spooky stories at the same time as marvelling at the big zoo animals.

This will truly be a massive event for what is one of the most eagerly awaited holidays in America. More than 80,000 people are due to pack into the Louisville Zoo to see their spooks and spectres along with gorillas and Sumatran tigers. To give it some context that is bigger than the crowd which attends Manchester United football. 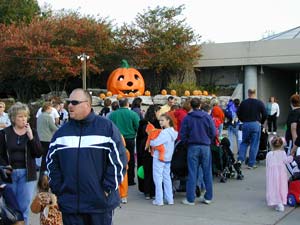 That is why the Louisville Zoo Halloween organisers are confident that their event will be the biggest in the world. And with so much effort put into setting it up they will get maximum exposure from the event running in over a whole week rather just the day.

Halloween takes place on October 31, 2011 but children can visit the zoo on October 13-16, October 20-23 and October 27-30. They can expect to be greeted by costumed ghouls and scary storytellers. Part of the Halloween tour will go through the Gorilla forest and it will finish up at the islands. Ever mindful of its responsibilities as a conservational entity, the zoo will be asking guests to bring their own bags so that no unnecessary litter is created. On Halloween days the zoo will close to regular visitors at 3pm and the Halloween guests can then come between 5-8.30pm.