The Libyans are not the only victims of the protracted fighting that is going on in the North African country.

Indeed the rebel efforts to take over Libya from the dictator Gaddafi are putting the lives of lots of innocent animals at risk.

The residents of Tripoli Zoo now find themselves trapped without food and water as the battle rages around them. 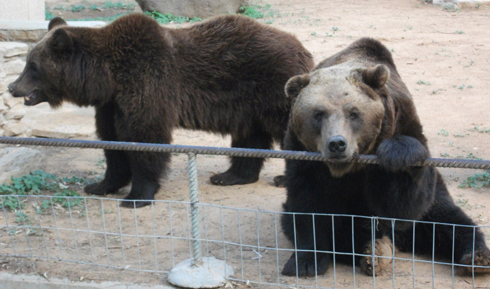 That is why the International Fund for Animal Welfare has been feverishly fundraising over the last few days to buy food for the beleaguered animals.

There is no one else to look after them as Tripoli zoo keepers abandoned the zoo while the state of flux has led to food and water shortages for the animals.

The lack of water is especially dangerous in a country as hot and dry as Libya where temperatures are currently as high as 35 degrees Celsius.

Power shortages have also meant a lack of access to medical supplies which are vitally needed as the animals’ cages become increasingly squalid.

With more than 1,000 animals kept by the zoo it is no wonder that Twitter and Facebook campaigns have been up in arms about the animals.

Numerous well-known animal organisations were initially hesitant about jumping into the fray but now a number are getting involved including the American Zoo Association and the World Association of Zoos and Aquariums.

The executive director of WAZA, Gerald Dick, said: "As far as food is concerned, this week is fine, there is enough stored for the coming week and money has been raised to help the zoo staff to get food locally."

So far there is enough money to take care of the next week’s food supplies for the captive animals and they have rectified the water supply situation. However the situation is precarious as zoo animals cost more than £1,200 to feed per day. That means that £63,000 alone would be spent on keeping the animals alive for the next six weeks.

The issue of getting medical supplies is even more sensitive as Libya has no supplier of its own, but instead has to bring in medicines from neighbouring countries like Egypt and Tunisia.

The hope is that the new Libyan government will be able to take over the funding of the zoo in the upcoming weeks, but as with much of the war, this is uncertain.