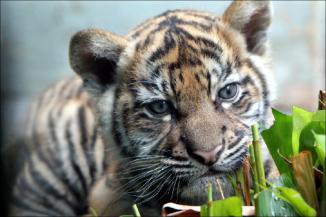 On a day when the guardian newspaper reported that the Javan rhino has been driven to extinction in Vietnam there was at least some good news. It came in the form of three newly born Sumatran tigers at the Taronga Zoo in Sydney Australia. If ever there was a day that emphasised the importance of zoos, this was it.

There are only 400 Sumatran tigers left in the wild and so if a zoo provides a safe haven for animals to breed then that must be a good thing. The carnivore supervisor at Taronga Zoo Louise Ginman, said: “The male tiger Satu was brought to Taronga from Germany as part of the international zoo breeding program for Sumatran tigers. We encouraged him to mate with our Taronga-born female Jumilah in order to introduce new genetics.”

Describing the cubs she said that the boys were cautious but were quickly growing larger and more confident.  On the other hand the female cub was described as cheeky. The general public will be able to see the cubs for short a period because they tire easily. They are still very young, having only been born in August Ginman summarised the importance of breeding programs for wild animals: “There are very few Sumatran tigers left in the wild. Seeing them here at Taronga Zoo, where we can protect a species that is rapidly going extinct, is pretty special.” While Sumatra is the last place that the Sumatran tiger is still alive, nearby Java now has the final fifty remaining Javan rhinos in existence. The main threats to the beautiful and exotic creatures are poachers and the destruction of their habitats. Poachers kill rhinos for their horn, while the paws of tigers are also thought to have medicinal properties. Although some people disagree with keeping wild animals in captivity this is one of the only ways to protect the species.