Big zoo animals like elephants are a real crowd puller, but there is another way in which these giant mammals can empower zoos.

The Munich Zoo in Germany is now harnessing the vast amount of dung that elephants create to produce biogas. This biogas is in turn capable of generating electricity and lowering the utility bills of the zoo. 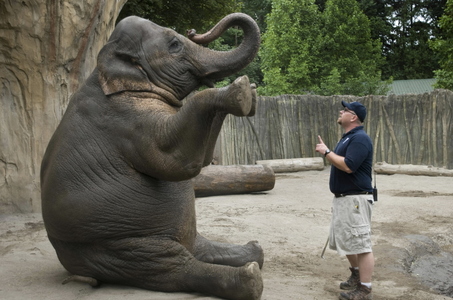 The Munich Zoo is using large containers of 100 cubic metres each to catch the brown gold and each container holds about a week’s worth of elephant dung. The dung is mixed with warm water and left to decompose to produce a carbon dioxide and methane hybrid gas. Once it is allowed to rise naturally the gas is then collected in a balloon that’s suspended above it.

Park supervisor Dominik Forster explained the process. He said: “The biogas is fed into a gas-powered engine that's used to generate electricity. The balloon can store enough biogas to meet 5% of our energy needs. The dung that is left is also able to be used as fertilizer.” He added: “It’s also great because we don’t waste anything." In fact the elephant dung produces enough heat to warm the entire gorilla enclosure.

Elephants have a huge appetite as they can eat 100 grams of food every day, producing more than 2,000 tonnes of dung per year. Yet the resultant poo is only enough to power about 100 houses per year. It is a small return but one which the Munich Zoo thinks is entirely worth it.

Noah’s Ark Zoo Farm has recently declared its intention to create an Elephant Eden, which will be the largest elephant enclosure of its kind in Europe. The enclosure will increase the amount of big zoo animals than Noah’s Ark Zoo Farm has on display. It is uncertain as yet whether the zoo will follow in the footsteps of its Munich counterpart by making use of elephant poo power.