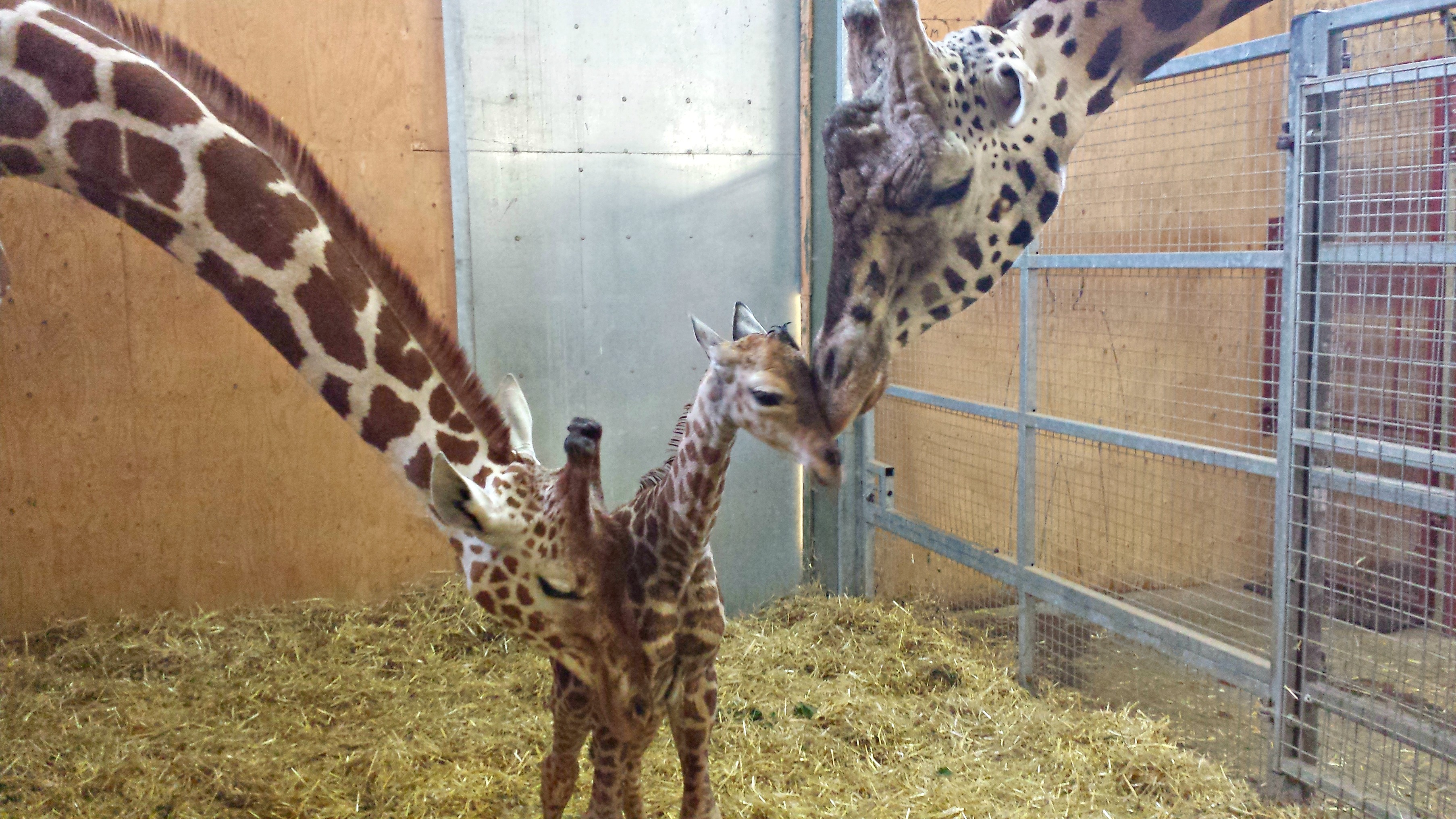 A gorgeous baby giraffe arrived at Noah’s Ark Zoo Farm in a surprise birth during the daily Giraffe Talk! Visitors attending the zoo’s talk, given by the animals’ keepers each day at the Giraffe House, were thrilled when mum Genny went into labour on Friday afternoon. The little calf certainly knew how to make an appearance, popping out while Giraffe Keeper Emma Green was discussing when Genny was likely to give birth. She had just been saying that the baby was expected in the next two days when Genny’s waters broke and two tiny hooves appeared! 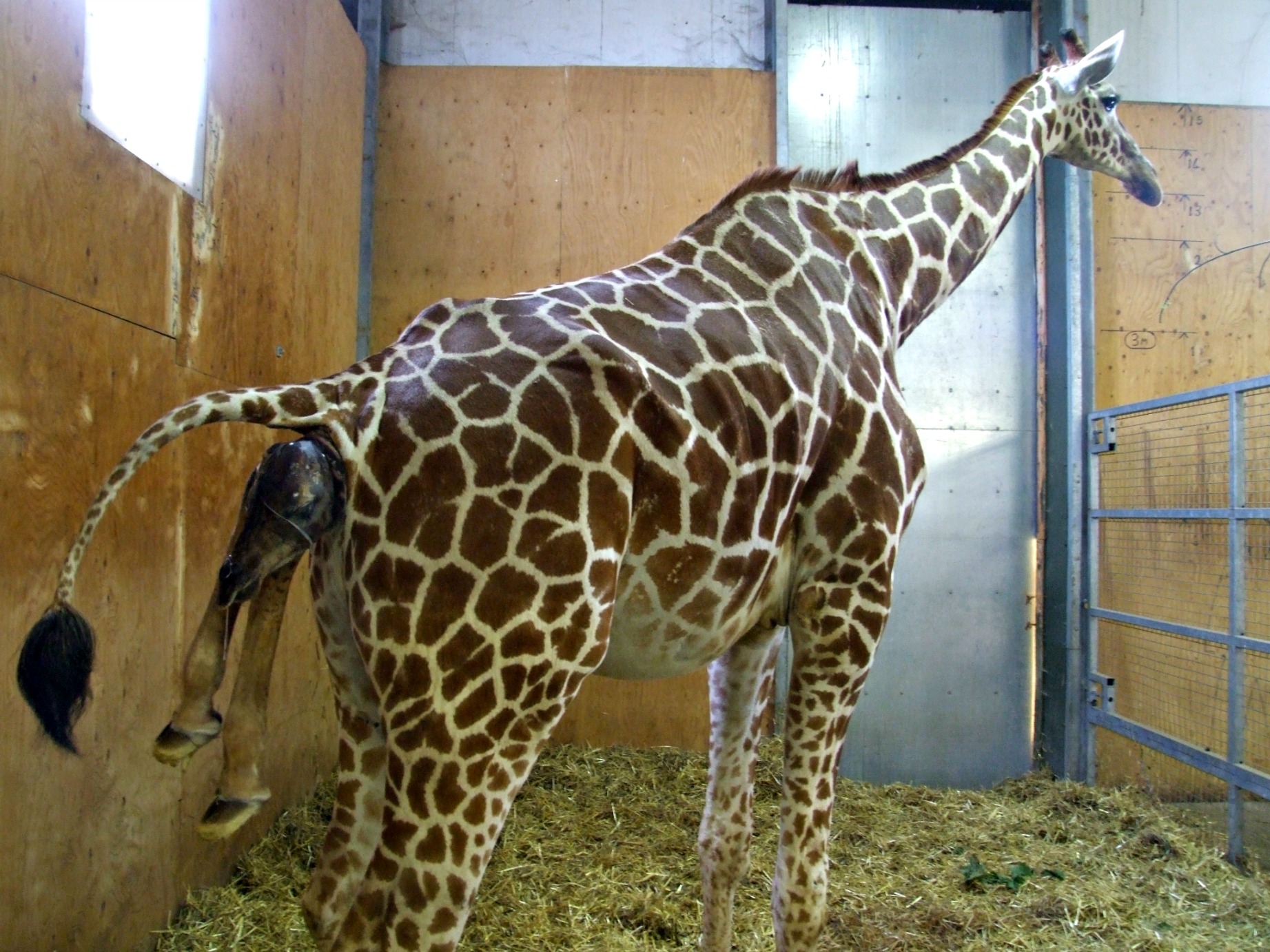 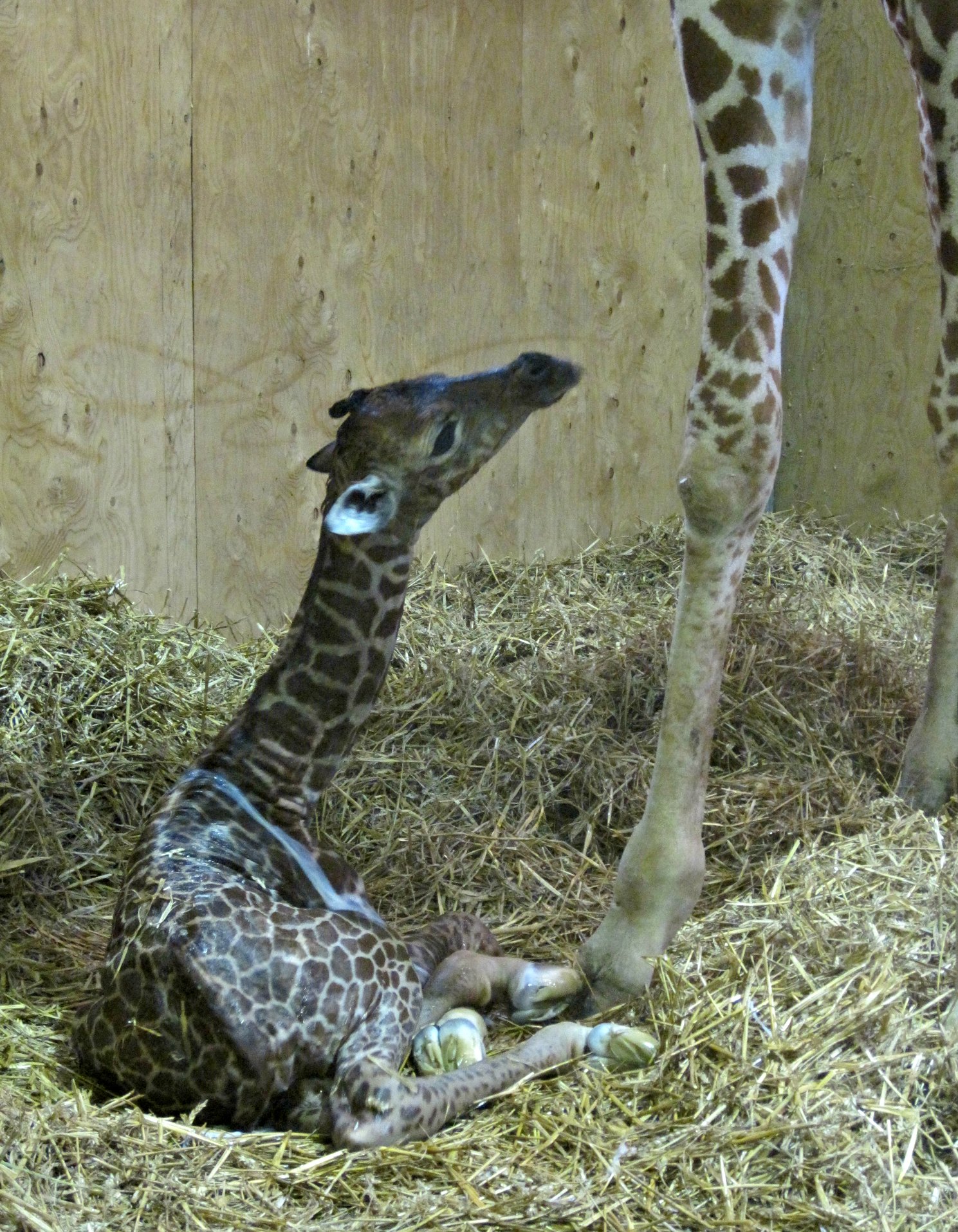 While the lucky visitors got to see the start of Genny’s labour, keepers soon moved her into a straw-filled private part of the Giraffe House so she could get on with the birth in peace and quiet. Keepers were on hand to monitor mum throughout the birth and after two and a half hours a little calf was with us. Dad Gerald showed his support by staying nearby throughout the birth of his new son. The proud dad, who is 10 years old, is also father to Genny’s firstborn George, who was born in 2012 – and also kept an eye on his mum during his brother’s birth. The boys often leaned their necks over the partition fence to provide their support. Genny, 6, and Gerald are very much the happy couple, still ‘loved-up’ and happy to be second-time parents. Keeper Emma said she was delighted that everything went so smoothly, adding: “Both mum and baby are doing really well – Genny is a very natural mum! We were delighted to watch her new calf’s first steps and will monitor the family.” 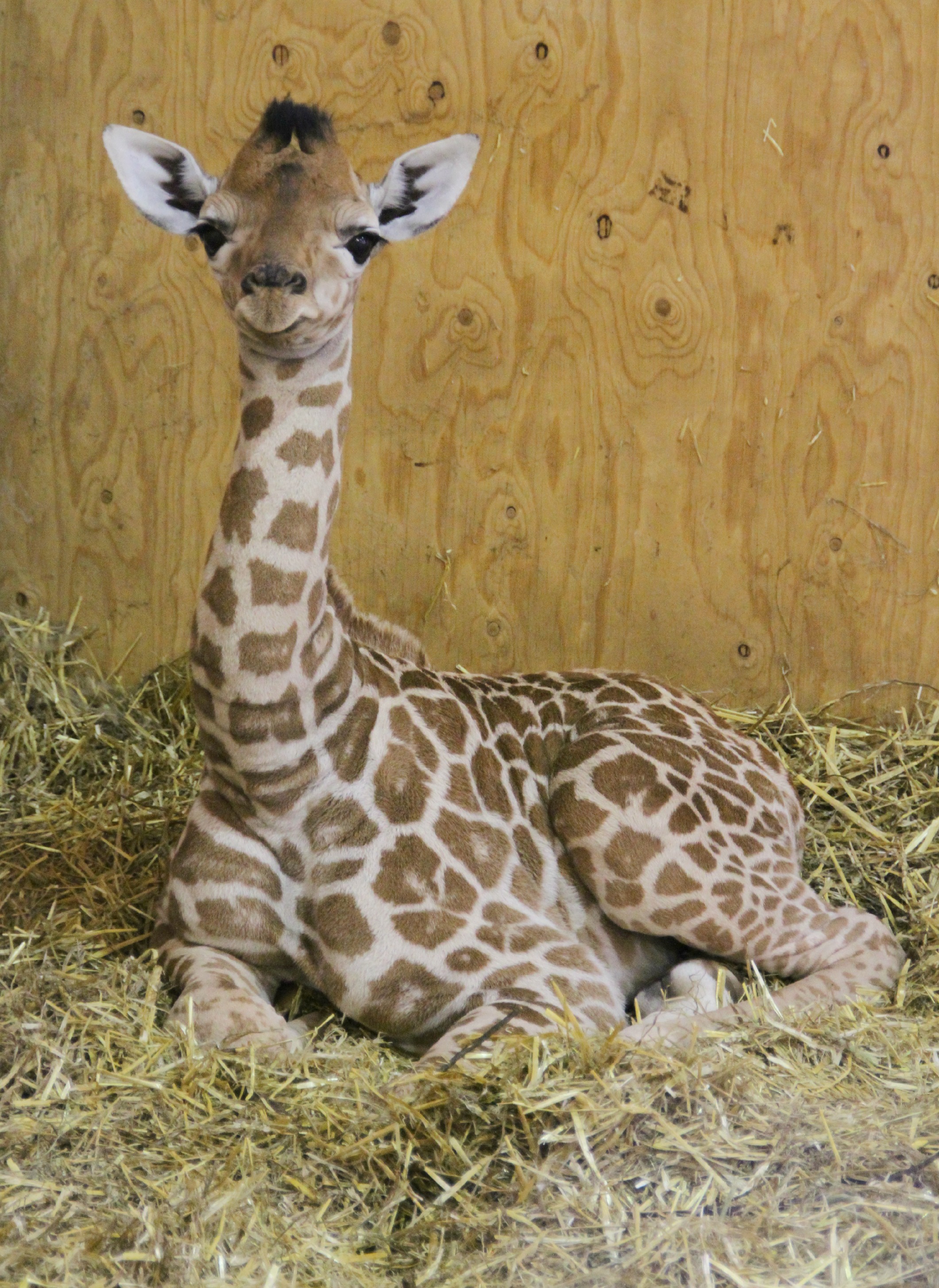 Incredibly, the new baby giraffe arrived on the third anniversary of Emma’s employment at Noah’s Ark! It’s not the first time a giraffe has arrived in time to mark Emma’s achievements, as her first day as Head Giraffe Keeper following promotion two years ago saw the birth of George the giraffe! Little Geoffrey has already hit headlines thanks to his timely arrival, which came a few days earlier than his due date of July 6. The average gestation period for a giraffe is around 15 months and Genny’s labour was textbook, as giraffes usually give birth standing up and the babies are born with their two front hooves first.

The happy family have all been getting to know each other and Geoffrey has been exploring his new surrounds and testing his limits with his parents!

Geoffrey is eating solids from birth but is also reliant on his mum’s nutritious milk for the first six to 12 months of his life. He has been spending the past few days in the Giraffe House bonding with the family and the house is now open for the public to come and meet Geoffrey. We’ve got lots on offer this summer and, as always, there’s our packed daily schedule of talks and feeds where you can get an insight into the lives of our majestic animals, from our Elephant Talk through to the Big Cat Feed. After all, the Giraffe Talk visitors got to witness the incredibly rare live birth of one of the world’s most incredible animals! Come along to see little Geoffrey and his family at Noah's Ark yourself - if you book your day tickets online you'll get a 5% discount! We are open from Monday – Saturday, 10:30am – 5pm.

For more information about our giraffes or other big zoo animals visit the Noah’s Ark Zoo Farm website or call 01275 852606.