Zoos come under fire from some groups which believe that animals should never be taken out of the wild. But another argument is that zoos play a vital role in helping to learn more about and conserve endangered species. The plight of giant pandas, one of the world’s most endangered species because of their reluctance to breed, is a case in point. 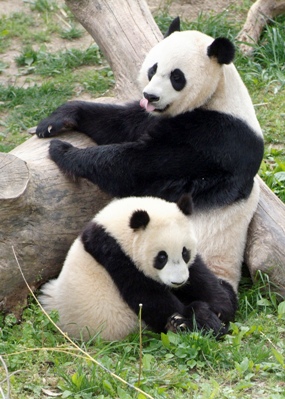 And Edinburgh Zoo is about to welcome the first giant pandas to go on display in the United Kingdom for almost two decades. The pandas were given to the UK as a gift from China in January and under the terms of the agreement they will be looked after by the Royal Zoological Society of Scotland. Hailing from the from the Bifengxia Panda Base near the city of Ya'an in China, Yuang Guan and Tian Tian are set to experience the delightful British weather soon. Hopefully the cold will encourage them to snuggle up and breed as this is one of the main aims of the project.

The head panda keeper at their home in China, Yang Jie, said: "I do hope they can have a baby. But it is a question of how well they adapt. They need to like each other but whether or not they can successfully mate depends on the keepers’ experience." The pandas will have little privacy however as their reinforced glass cage will allow them to be seen by up to 600 spectators per minute. The special enclosure cost a quarter of a million pounds to make and is even bullet proof! But before the giant pandas can attempt to start a family they have to go through quarantine, a process which should be completed by the middle of November.

It is expected that the head Edinburgh Zookeeper, Alison Maclean, will head out to China to make sure that the animal’s transport goes smoothly. The whole trip will then have to be signed off by the Chinese Wildlife Conservation Association in October just before the pandas travel. Edinburgh Zoo is hoping that the pandas boost flagging visitor numbers as the zoo has been struggling with a decline in income. Pandas are among the most prized zoo animals and have led to soaring visitor numbers in other zoos where they have been introduced.