The pregnancy of a rhino which is on the verge of extinction is being closely monitored by the international community. Ratu the Sumatran rhino is now entering the final quarter of her pregnancy in the Way Kambas National Park in Indonesia. However nothing can be taken for granted as Ratu miscarried her last child and she has been given a hormone boost to help her deliver successfully this time. The national park covers a rhino sanctuary which is monitored by the International Rhino Foundation but there are only three other rhinos present in it. While Ratu is a wild rhino, the male Andalas was born in Cincinnati Zoo and rereleased into the sanctuary. 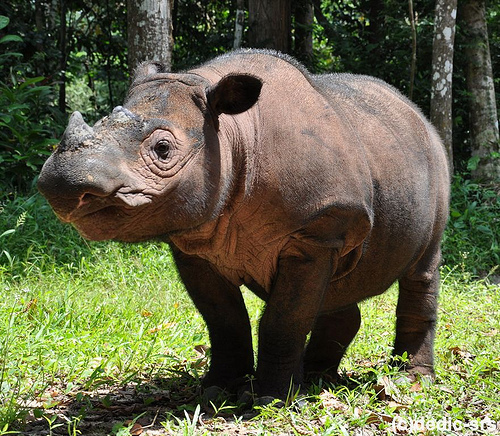 With only 200 Sumatran rhinos thought to be left in the wild, the species in on the critically endangered list. In such a case zoos play an important role in conservation because rhinos are constantly under threat in the wild. In the short term they are a target for poachers who can make huge amounts of money from their horns on the black market. In the long term their entire habitat is under threat as loggers destroy their tropical forest habitat. Dr. Susie Ellis, the executive director of the International Rhino Foundation said: “We’ve got fingers crossed that everything will continue to go well and that Ratu will deliver a healthy baby sometime in late spring or early summer. This is important in the ongoing effort to protect Indonesia’s last remaining wild Sumatran rhinos.”

Noah’s Ark also has two white rhinos, a male and female called Rumbull and Rumba, and the male has just reached sexual maturity. Zookeepers at Noah’s Ark will be hoping that they will also do their bit to help conserve the species. White Rhinos have been one of the largest successes of conservation efforts, numbers having been significantly boosted since the animals were considered endangered a decade ago. However there are only still around 17,000 of the southern white rhinos, while the northern species is virtually extinct. If you want to learn more about the difference that conservation can make to wild animals, why not organise educational school trips here or participate in our zoo keeper experience days? Noah’s Ark Zoo Farm has a Quality Badge from the Learning Outside the Classroom Scheme.