John Huibers, a wealthy Dutch man, has recently completed the construction of an exact replica of the fabled boat that carried two of each animal through the biblical floods.

A wealthy Dutch man has built a real-life Noah's Ark.

In 1992 Mr Huibers dreamt of the North Sea flooding the whole of the Netherlands, which triggered him to start making plans for the boat. It was designed and built to the specification as described in the Bible: “15. This is how you are to build it: The ark is to be three hundred cubits long, fifty cubits wide and thirty cubits high. 16. Make a roof for it, leaving below the roof an opening one cubit high all around. Put a door in the side of the ark and make lower, middle and upper decks.” Genesis, 6. A cubit is an ancient measurement, the length of a man’s arm from the elbow to the fingertips. These dimensions roughly convert to 137 metres long and 14 metres high… a huge boat that took six years to complete once construction had begun! 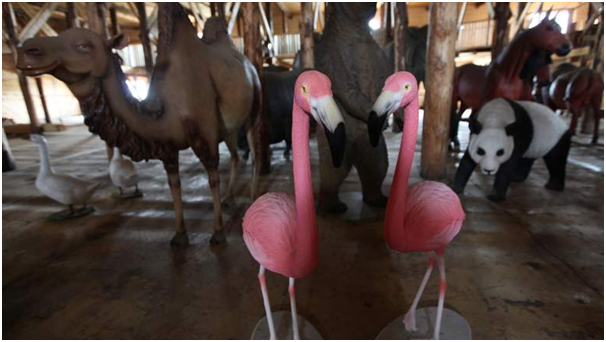 The menagerie of animals in Noah's Ark.

The copy of Noah’s Ark is now open to the public as a ‘Bible Museum’. The attractions include a menagerie of animal models and a real life aviary. “We want to tell people about God,” Mr Huibers told AFP during construction. “We wanted to build something that can help explain the Bible in real terms." We wonder whether our big zoo animals would like it… we think they’re happy roaming around Noah’s Ark Zoo Farm for now.