America’s shockingly lack lustre laws on the importing of exotic animals were exposed this week when police in Ohio were forced to kill dozens of escaped big zoo animals. The massacre took place in Muskingum County after the owner of a private reserve set all his animals free before committing suicide. 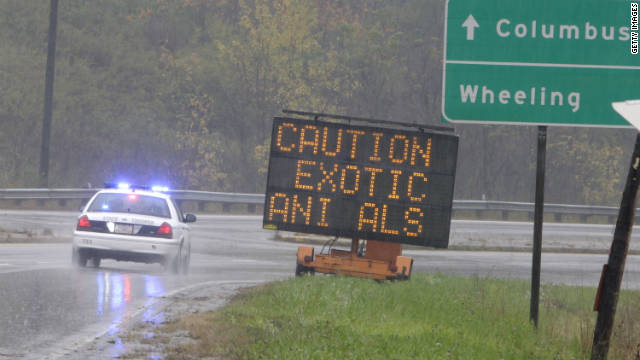 Speaking while he was still trying to contain the animal escape Muskingum county sheriff Matt Lutz said."These are wild animals that you would see on TV in Africa. This is a bad situation. Any kind of cat species or bear species is what we are concerned about.We don't know how much of a headstart these animals have on us."

These dangerous animals included wolves, bears and tigers who escaped from the private zoo farm in Zanesville in the dead of night. The local police and celebrity zoo keeper Jack Hanna said that they were left with no choice but to kill the animals because it was too risky to rely on tranquiliser guns in the dead of night. Most of the animals were hunted down close to the Interstate 70.

However not all of the 48 animals have been accounted for - it is believed that one monkey escaped. No members of the public have been harmed. While the animals were loose schools in the district had to be closed and the public were asked to remain indoors. While some of the nearby Columbus Zoo staff tried to tranquilise the animals, police on the other hand just began shooting them on sight. Ohio has the highest number of injuries and deaths caused by exotic animals of any state in America, due to the lax laws on importing them.