During the wettest April on record for a century, a rare white baby reindeer was born at Noah’s Ark Zoo Farm in Wraxall. The two female reindeers at the zoo are such characters that they are known as Ronnie and Roxie, after the feisty sisters of the same name from Eastenders. Although the rain has put a dampener on the spirits of many Brits, Roxie brought some sunshine to proceedings by giving birth to a perfect snow white reindeer calf on Friday, April 27. 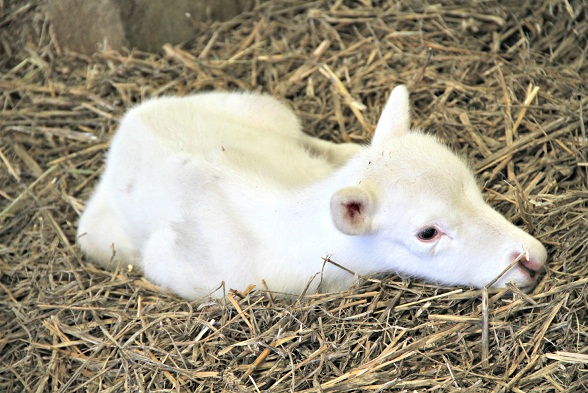 The 'East End' reindeer sisters and new baby are currently taking refuge under a warm straw-filled pen inside the popular Animal Show barn. Visitors can see them tucked up there, along with other favourites such as Lance the Llama and Jessie the Jersey Cow. Marc Roberts, the zoo keeper who was first at the scene of the birth, said: “The reindeer duo of Ronnie and Roxie are popular all year round with our visitors, and not just at Christmas! We’re all thrilled to see mum and baby doing so well together - we’re just waiting for Ronnie now, who is due to give birth anytime, which will make it one big happy family.”

While Noah’s Ark Zoo Farm is renowned for being a 100 acre outdoor zoo park where big zoo animals can roam freely, we also have a number of indoor attractions so that visitors can avoid the rain. In fact there are so many interactive displays of animals and indoor play areas that Noah’s Ark Zoo Farm is one of the foremost all-weather attractions in the south west. With over 30,000 square meters of indoor exhibits and attractions and playgrounds; visitors can enjoy the all-weather events and activities at the zoo as part of their visit, including a heated soft play barn and the newly extended Cafe. Noah’s Ark has had several special births this spring, including a new baby ring-tailed lemur, baby capybara and mara, along with the usual farmyard baby boom of chicks, ducks and lambs. Despite the wet weather, the rain doesn’t appear to be dampening the spirits of educational school trips to the zoo, who have been making the most of breaks in the rain to see the big zoo animals outside in the park. Noah’s Ark Zoo Farm can be found just outside of Bristol. It is only minutes from the M5 motorway, and open Monday – Saturday 10:30am – 5pm. For more information about the animals, entry prices and events at Noah’s Ark, visit http://www.noahsarkzoofarm.co.uk or phone 01275 852606.