A zoo in America has welcomed a new baby gorilla, the first born at their Great Ape House for years. Lincoln Park Zoo in Chicago has a reputation for bringing through young gorillas and they managed to kindle the romance between the 22 year old male silverback Kwan and the 16 year old female Bana. In truth it did not take much doing as they took an instant liking to each other.

Bana soon gave birth to a female infant gorilla who as yet does not have a name. 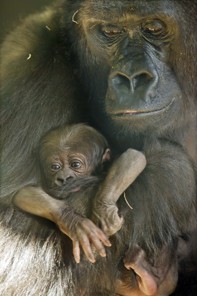 The birth set the zoo keepers on high alert and the baby was monitored constantly to make sure none of the other gorillas harmed it. Meanwhile the gorilla exhibit was closed off to visitors to give the new family some privacy. That vigilance has paid off and the Great Ape House is now being reopened so that the public gets a chance to see the new baby gorilla. She is part of a larger family of seven gorillas, so Lincoln Park Zoo visitors now have the chance to see how gorillas live as a family.

Lincoln Park Zoo was known for having one of the most successful breeding in captivity programmes in the world but in order to spread the genetic pool, gorilla breeding programmes have been spread across the US of late. The primate curator Maureen Leahy said: "Bana had never had a baby at Brookfield, and Kwan has sired only one baby here, so they were a good match for mating." "Their daughter is the 49th gorilla born here at the zoo since the first birth in 1970.” Getting gorillas to breed is a tricky business but luckily Bana was ‘socially compatible’ with Kwan and his family, which includes a harem of five females. She then took extra care of the baby once it was born, shielding it in her arms day and night. Like a human baby, the female infant gorilla is waking up the rest of the group at night with continual crying. Yet the signs are good with the father Kwan already having shown signs of being protective.