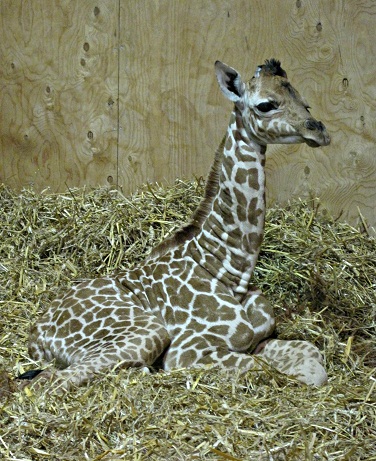 A Baby Giraffe was born at Noah's Ark Zoo Farm. Gerald had to wait a long time for this moment, it was four years before his beloved mate Genny finally came to his field, which he had previously shared with a goat called Eddie. Genny made a thousand mile long journey across Europe to arrive at Noah’s Ark Zoo Farm in 2010. Genny, who measures 12 foot, obviously likes tall men as she quickly fell for her 16 foot pen mate. The two clearly did not wait around long to consummate their relationship as giraffe gestation takes between 400-465 days.

Giraffes give birth standing up and the sight of George’s legs poking out had excited zoo keepers rushing to be on hand and help with the birth. Giraffe zoo keeper Emma Green said: “I’m thrilled to say that the happy family are doing very well: little George seems very healthy and relaxed, and has been feeding well from mum Genny over the weekend. He has his mum’s markings, and seems to have inherited her good-looks too! We’re delighted for Gerald and Genny and look forward to watching George’s development over the coming months.”

Many of the animals at Noah’s Ark Zoo Farm initially come to the zoo in pairs, but often two quickly becomes three as our zoo is clearly a great place to raise a family! Mum and baby will now be allowed their own space for a few months so that George can get stronger, though Gerald will just be in the next door pen so that he can keep an eye on his family at all times. 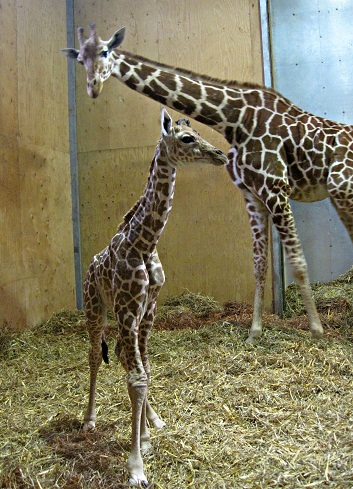 George the giraffe will now be looked after by his mum and zookeepers. The live birth and first steps of baby George were caught on film by Noah’s Ark staff and will shortly be made available online on the zoos website.

Noah’s Ark Zoo Farm is open from Monday – Saturday, 10:30am – 5pm and offers families a great value day out in 100 acres of animals and playgrounds. Tickets can be purchased online or at the gate, along with popular Season Tickets for returning visitors. For more information please visit our zoo website or phone 01275 852606.