A Black Week For Rhinos

It has been a bad week for the Black rhino. Last week a sub species of the Black Rhino was declared extinct in Western Africa. While rhinos are particularly vulnerable because their horns are so prized on the black market, the annual red list of endangered species now carries more threatened animals than ever before. The BBC reported that the western black rhino (Diceros bicornis longipes) is now extinct, while another subspecies, the northern white rhino is also on the brink of extinction. The main threat to rhinos in the wild are poachers who mistakenly believe that their horns carry special medicinal properties (in reality the horns are merely a mass of twisted hair fibres – keratin). The continual destruction of the rhinos habitat in the wild is also a threat to their existence. 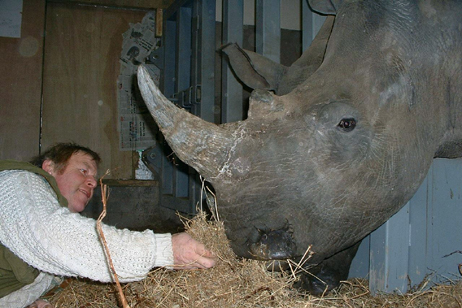 That is why the presence of rhinos in zoos is particularly important for conservation reasons. If zoos had been able to breed populations of the African black rhinos in captivity then this tragic extinction may not have occurred. Such is the story of the Black Rhino George who lived at Denver Zoo for 27 years.

Tragically George has just died as the ninth oldest rhino in captivity in the world. Chronic ill health meant that he needed to be put down after continually losing weight because of diarrhoea and other ailments. The final straw was a ruptured spleen which meant that George could no longer stand. He had to be euthanized on Tuesday morning.

But the good news is that before George slipped off the mortal coil he was able to father a son called Tony. Tony was born in 1992 and remains one of only 90 black rhinos alive in American zoos. Two of those are situated at Denver Zoo, a male named Mshindi and a female named Shy Anne.

Noah’s Ark Zoo Farm in Wraxall also has a pair of white rhinos which are currently trying to breed. Why not pop down for the day? You can even try your hand at being a zoo keeper and get the chance to feed these magnificent beasts.